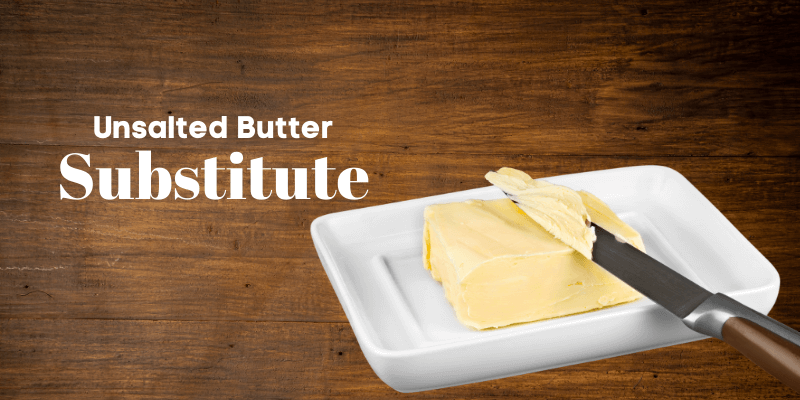 As you step on your baking journey, you’ll find yourself having to reach for butter A LOT. Butter is a multipurpose ingredient that adds a touch of magic to all of your baked goods. It tenderizes them, makes them flaky, and adds an amazing flavor. It’s no surprise that this ingredient is so widely used.

While you might already have butter in your fridge ready to go either for your bread or for your usual cooking, it may not be the same butter predominantly used in baking – unsalted butter, that is.

Well, you’ll be glad to know that you don’t NEED unsalted butter to bake. In fact, there are other substitutes you can use instead. Regular salted butter, lard, and coconut oil to name a few.

I’m Angie, I’m a self-taught baker who’s been baking for over ten years. Anyone who’s opened up my fridge would know that butter is a staple for me and there are always at least five blocks of it in my fridge. What can I say, baker problems?

In this article, I’m going to share with you four substitute options for unsalted butter.

Nine times out of ten when you follow a baking recipe, you’ll find that even though the recipe specifically calls for unsalted butter, for some reason it will also call for salt.

If you’re like me, your eyes would be rolled so far back at this point because … Hello? What’s with the unnecessary extra step? Do I look like I have nothing better to do with my time?

I’m joking, not this level of passive-aggressiveness – but you know where I’m coming from.

The reason this is the case is so that the amount of salt added can be measured and controlled precisely. Salted butter from different brands likely contains different amounts of salt. In order for the recipe to be more easily and reliably replicated, recipes would tell you to use unsalted butter and add salt separately.

Hey, I know what you’re thinking but hear me out! If you’re a professional chef please skip this section before I embarrass myself.

Before you consider other options, remember that salted and unsalted butter are really two of the same except for the added salt. A very quick and easy but not necessarily the best way around this problem is to simply reduce or eliminate the salt in your recipe and use salted butter instead.

I am personally guilty of doing this because where I live, salted butter is simply more accessible. Instead of adding more salt in my brownie, cookie, or even buttercream recipes, I eliminate it altogether and use salted butter instead. I find that the saltiness balances out and brings out the sweetness and other flavors perfectly AND it saves me time.

If you’re someone who’s not too precious about the exact measurement of salt in your recipe, I highly recommend replacing your unsalted butter with salted butter. You can use it in a 1:1 ratio.

Can I use salted butter instead of unsalted for cake?

You can use salted butter instead of unsalted for cake. However, you’re going to want to reduce the amount of salt used in the recipe altogether. The last thing you want to sink your teeth into is a slice of cake that tastes more like a seashore than a delectable indulgence.

Similar to butter, lard is fat that comes from an animal, in this case, pigs. Lard is soft and whitish in color, and it also gives great flavor to your baked goods. Lard has a higher fat content of close to 100% compared to butter, which contains only around 80%.

You can use a 1:1 ratio when replacing butter with lard. That said, because lard has lower water content, it’s recommended that you replace each cup of unsalted butter with about ⅞ cup of lard for a more accurate substitution.

I suggest using this substitution in recipes that have to be baked such as in dough or pie crust. I wouldn’t recommend substituting butter with lard to make buttercream though, as that would simply make it lard cream and to me personally, that just doesn’t sound very appetizing.

Shortening is any fat that is solid at room temperature. While technically speaking lard should also be included in this category, shortening mostly refers to hydrogenated vegetable oil.

Shortening is often used in baking to make the flaky pastry. It’s cheaper and easier to control compared to butter which varies quite a lot in content depending on the brand. No salt is added to shortening which makes it a great substitute for butter in baking recipes.

Like lard, shortening is also just fat therefore you should substitute about ⅞ cup of shortening for each cup of unsalted butter.

A vegan substitute? That’s always a yes! Like butter, coconut oil is also saturated fat, in fact even more saturated than butter. It carries a lot of health benefits and can be used in both baking and making frosting.

You can find coconut oil in different forms – regular, refined, or fractionated. I recommend using regular coconut oil to substitute for unsalted butter as it will better resemble the texture of butter.

Keep in mind though, when using coconut oil as an unsalted butter substitute, that it most likely will have a pretty distinct coconut flavor. You might find that it adds an interesting touch to the treatment you are making, or you might hate it.

If the coconut taste is too strong or it doesn’t compliment your baked treat, I’d suggest choosing a refined/clarified coconut oil instead which has no distinct coconut flavor.

Vegetable oils of any kind will be a hit in baked goods. Vegetable oils provide an unprecedented amount of moistness to any creation it adorns, especially when it comes to rich cakes and decadent brownies.

The bonus of vegetable oils is they are dairy-free, making this an excellent choice for vegetarian and vegan bakers.

Anyone looking for a heart-healthy substitute for unsalted butter will enjoy olive oil in baking. Olive oil is known for its proven health benefits, so it tends to be a staple in most kitchens (including mine).

While olive oil is a great, healthy swap for unsalted butter, you need to make sure you’re using olive oil with a delicate flavor. Otherwise, it can overpower the taste of your baked treat. This is especially true for “lighter” desserts, such as sugar cookies.

Use olive oil in a 3:4, but never use it for recipes that call for creaming the fat with sugar. This is a recipe for disaster.

Although butter is downright delightful, it comes with a hefty calorie count. But that doesn’t mean you have to say sayonara to your favorite cakes, bread, and other favorite goodies.

The better option? Swap the unsalted butter for applesauce in a 2:4 ratio. For example, if the recipe calls for a cup of butter, use ½ cup of applesauce.

This swap is so sweet you might need to reduce the amount of sugar in your recipe.

As a bonus, applesauce will ensure that your baked goods remain consistently moist with a melt-in-your-mouth texture that’s highly enjoyable.

Next up on the list is none other than margarine. Plenty of people opt for margarine over butter, to begin with, so this might not be a significant change if you’re manic for margarine.

The biggest issue with using margarine in place of butter is that it can alter the final result. For example, cookies baked with margarine over butter tend to spread out more and have less of a crunch factor – although the flavor remains the same.

Margarine has a higher water and salt content than unsalted butter. Nix the salt altogether and reduce the liquid ingredients by a pinch for the best results.

What Can I Substitute for Butter in Frosting?

Your cake wouldn’t be cake without the delicious frosting – right? Whether you’re a fan of classic buttercream frosting or prefer something with more depth like maple frosting, one thing is for sure: you can’t use applesauce or olive oil to make it. What can you do?

If you’re looking to substitute butter in a frosting recipe, you have three great options.

Still wondering about unsalted butter? I might have some answers for you. Check below to see my answers to commonly asked questions related to the topic!

What can replace butter in baking?

You can replace butter with many different ingredients. It comes down to what you are making and what effect butter has on the dish. Margarine and shortening are two of the most common options.

Why is European butter better?

Many people consider European butter to be superior because it is higher in fat content and churned longer which makes it more flavorful.

Can I substitute oil for unsalted butter?

The answer depends on what you’re using unsalted butter for. It’s possible to substitute part of the fat called for in a recipe with oil or use it sparingly to prevent batter or dough from sticking to the pan.

I would not recommend substituting unsalted butter entirely with oil for baking because it will change the emulsification of the liquids and your product will most likely turn out greasier than you’d like.

What do you do if a recipe calls for unsalted butter?

If the recipe calls for unsalted butter and all you have is salted butter (or another sub that contains salt), you will need to reduce the amount of salt in the recipe. It’s best to reduce salt by ¼ teaspoon per every ½ cup of butter or another salty substitute.

Is oil better than butter in baking?

In terms of moistness, oil can be better than butter in baking. However, you won’t find the same indulgent flavor as butter presents.

Unsalted butter is not difficult to replace. Once you understand the role of unsalted butter in your recipe, you can choose a substitute accordingly.

Have you had difficulties replacing unsalted butter? What did you end up using and what was the result? Share with us your favorite substitutions below!