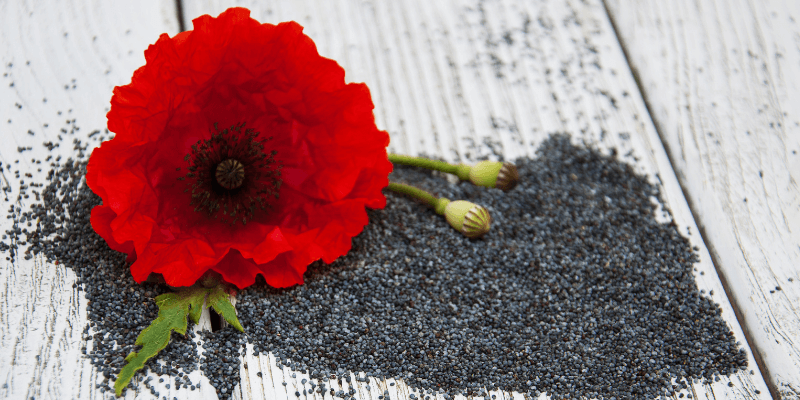 Poppy seeds are an essential ingredient for many recipes, from lemon cakes to banana bread to the good old-fashioned poppy seed cake. But if your recipe calls for poppy seeds and you find yourself without, you can always substitute for toasted sesame seeds or chia seeds.

Hey, there! My name is Michelle, and if I’m being honest, I really love baked treats with poppy seeds. There is something about those nutty little crunchy numbers that really add an element of pizzazz to any baked treat they adorn.

But not many people have poppy seeds on hand unless they previously bought them for a different baking recipe. If you find yourself in this nutty situation, don’t hesitate to use a substitution.

Keep reading to find out essential info on poppy seed substitutes for baking.

What Can I Substitute for Poppy Seeds?

If you’re out of poppy seeds. There are a few great substitutes for poppy seeds in baking recipes. You’re sure to have at least one of these subs on hand,

The best substitute for poppy seeds – in baking or otherwise – is toasted sesame seeds.

Sesame seeds have the same nutlike flavor as poppy seeds, so they can work well in just about any recipe. However, lightly toasting them will enunciate the nutty flavor further, making them even more similar to the poppy seed.

As a bonus, they have the same texture as poppy seeds.

If you buy black or brown sesame seeds, you can also replicate poppy seeds’ color.

Needless to say, you can fool almost anyone by substituting toasted sesame seeds for poppy seeds.

Flax seeds don’t look much like poppy seeds, but their texture and nutty flavor mimic them quite well. Use them in any baking recipe, and you’ll enjoy the taste.

Hemp seeds are trickier to work with. They will need to be ground down to use in baking recipes. While you won’t be able to see the hemp seeds in your treat, the nutty deliciousness will remain present.

Can You Use Chia Seeds instead of Poppy Seeds in Baking?

Chia seeds have gotten all the buzz in recent years due to their impressive health benefits, so it’s not uncommon for people to have them on hand.

Can they work as a sub for poppy seeds? Absolutely.

Chia seeds hit the mark when it comes to the texture and appearance of poppy seeds. Their flavor is a bit tamer than poppy seeds, but they still contain nutty undertones that can work well in a wide range of recipes.

However, you need to be extra careful when using chia seeds in your baking recipes. Chia seeds expand when they come in contact with liquid. This can result in moist and slimy seeds rather than the crunchy and crisp texture you’re seeking.

One of the most popular baked goods using poppy seeds is none other than the classic Lemon Poppy Seed Cake. (My mouth is watering just reading the title of that recipe!)

That said, it’s not surprising that bakers might be on the lookout for the best replacement for poppy seeds in lemon cake.

Again, toasted sesame seeds hail as the best sub for poppy seeds. If you only have flax seeds, don’t hesitate to use them. Flax seeds look nothing like poppy seeds, so your lemon cake will look slightly different. However, the flavor and texture will remain the same. Yum!

What do poppy seeds add to baking?

Poppy seeds are primarily used in baking recipes to add a rich and nutty flavor and provide a crunchy texture. However, they can be used for more than that. In baking, they can also be utilized as fat replacers, flour enhancers, or thickening agents.

Are nigella seeds and poppy seeds the same?

Nigella seeds are not the same thing as poppy seeds. And while they can be used interchangeably in savory dishes, they’re not recommended for sweet treats.

That’s because of the hint of the smokiness of the seed, which doesn’t blend well with cakes, cupcakes, etc.

Should poppy seeds be soaked before baking?

It’s not essential, but you can certainly soak poppy seeds before baking. Soak them in hot milk, water, or oil before adding them to the rest of your ingredients. Soaking will soften the outer coating, allowing more nutty flavor and aroma to release into your baked goods.

Poppy seeds are an excellent addition to many baked goods, but they can easily be substituted with toasted sesame seeds or chia seeds. Flax seeds and hemp seeds can also be used, although they are the less popular option.