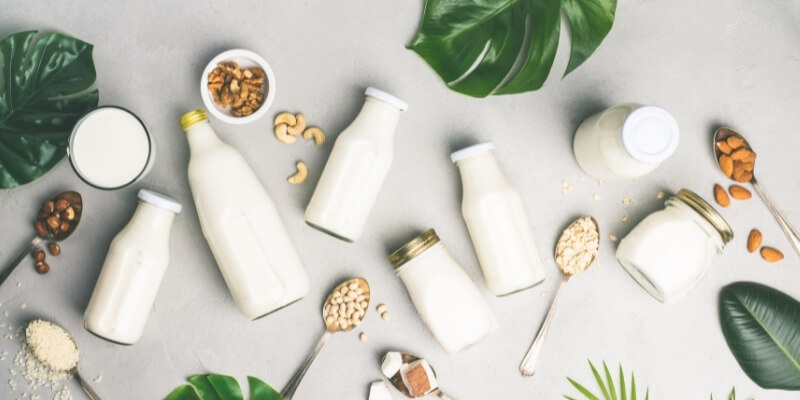 Annoying isn’t it? When you just can’t find something the moment you need it most – like milk! A kitchen staple. I feel ya.

Milk has several functions in baking which is why it is a common ingredient in a lot of baking recipes whether it be bread, cake, or other pastries. The question is, can this multipurpose ingredient be replaced if you don’t have it? (Because let’s be real, milk goes off so quickly and you’re not going to have a large stock at home at all times)

The answer is yes. In fact, there are many possible substitutes you can get your hands on easily. In this article, I’m going to share with you eight different milk substitutes that I have used for baking and yielded great results with.

I’m Angie, I’m a self-taught baker who has been baking for over ten years. I know the struggle of needing an ingredient urgently but not be able to get it right away. I’m always striving to discover different options to use to replace what I need and I’m ready to share these discoveries with you.

But are YOU ready to experiment? Let’s go!

Milk is considered a wet ingredient in baking. It’s no surprise then that milk moistens baked goods. But did you know that this moistening ability is also what allows gluten and leavening agents to activate, and dissolves sugar? All of these qualities allow milk to better the texture of our baked goods.

Milk also plays a role in the visuals of your final product. You know that beautiful golden glow? That browning that makes your baked treats look so incredibly appetizing? Yea, that’s milk. It’s the fats and the sugar in milk that make the caramelization happen.

If you want to know more about what milk does in baking, check out Michelle’s article What Does Milk Do in Baking where she explains to you exactly what this magical ingredient does.

Now onto what you came here for. Here are four milk substitutes you can use for baking if you don’t have milk on hand. These contain dairy, so check the next section if you are lactose intolerant or vegan!

Milk powder (or powdered milk) is essentially dried milk. It is a versatile ingredient and the best part, they keep for much longer than your regular milk. You can easily hydrate milk powder with some water to make milk whenever you need it.

To replace milk using this method, you will need ¼ cup of dry milk powder and 1 cup of water to replace each cup of milk.

Rather than using cow’s milk for your recipe, goat milk is also a very good option for substitution. Goat milk has a very similar consistency and content as cow’s milk. Research has shown that goat milk is more nutritious than cow milk for humans as it contains higher protein and is more digestible to us.

When using goat milk in your recipe, be mindful that it may taste tangier with a stronger aftertaste compared to cow milk. It also tends to have a thicker consistency.

You can substitute goat milk for cow milk in a one-to-one ratio. Easy right?

Sour cream is perfectly slathered all over a chunk of baked potato. Yogurt, already amazing on its own and an easy way to quickly level up your breakfast.

But did you know that these two are also amazing in baking recipes? Soured or fermented milk is higher in acidity compared to regular milk. These acids react with the bases in your recipe such as baking soda to create a wonderful chemical reaction that makes your baked goods super fluffy.

Compared to milk, sour cream has more fat and yogurt is denser in proteins and milk solids. You can loosen their consistency by mixing in about a tablespoon of water for each cup of the substitute you’re making. Beware, it will make your final baked treat tangier, but more often than not, it’s a nice touch!

Evaporated milk is, as the name suggests, milk but with most of the water content evaporated. This means that it is more condensed and packed with all the other good stuff in milk like protein, fats, and carbohydrates.

Because evaporated milk is so concentrated, you want to dilute it with some water so it resembles the consistency of milk more. For every cup of milk in the recipe, you can substitute it with ½ a cup of water mixed with ½ cup of evaporated milk.

If you are actively avoiding milk because of dietary restrictions or preferences, the following options are for you.

Oat milk has become a very popular substitute for milk not just in the vegan community but also for everyone. We have its neutral flavor, consistency, and resemblance to cow’s milk to thank.

Oat milk is relatively high in carbohydrates compared to the other dairy-free milk on the market, because it’s made of oats, duh!

To substitute milk with oat milk, just use a 1:1 ratio.

I’m sure you’re no stranger to nut milk. You can easily make nut milk at home or if you’re lazy like me, get it from the supermarket.

For this substitute, you can use milk made of almonds, cashew, walnut, or really any nut you can think of! Nuts are fatty and carry plenty of nutritional properties such as fiber and vitamins. If you’re buying it from the grocery store though, try to find an unsweetened version or it might add sweetness to your baked goodies.

You can use a 1:1 ratio of nut milk to replace milk.

Soy milk is made from blended soybeans and water. You can find different types of soy for your liking. The flavor of soy can stand out as being a little different compared to regular milk, but it will make a good substitution in terms of texture.

Again you can easily buy soy milk or make your own at home. Replace the milk in your recipe with the same amount of soy milk.

Coconut is a fatty fruit. We know this from how widely popular coconut oil has become. Coconut milk is smooth and carries a coconut flavor.

You can replace milk in your recipe with the same amount of coconut milk. I suggest using this method for your sweet baked treats and not so much the savory ones.

What kind of milk is used in baking?

Whole milk is generally used in baking. In commercial bakeries, dry milk is also widely used as it has a much longer shelf life.

Is milk necessary in cake?

You might be surprised to find that milk is actually one of the least important ingredients in cake making. Cake consists of mostly butter, sugar, and flour. You can achieve the same level of moisture by adding in the same amount of any other liquids such as lemon juice, rosewater, coffee, and more.

Which is better evaporated milk or fresh milk?

The answer to this question depends on what you’re looking for. Evaporated milk is simply fresh milk with a large percentage of water evaporated, leaving it more concentrated in fats, calories, and protein.

Now that you know what milk does and how to replace it with other ingredients in your recipe, I hope that your baking journey will now appear much smoother and easier to you. There’s always a way. And they’re all fun to experiment with.

Which of these substitutes are you most likely to try first? What is your go-to milk substitute? Let us know in the comments section below!