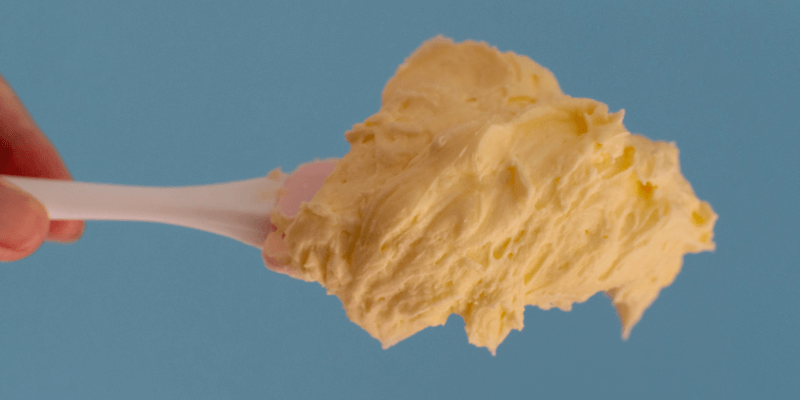 Buttercream is one of my favorite options for decorating cakes and cupcakes, but it’s not foolproof. Much can go wrong in the land of buttercream, from overly runny nightmares to grainy mishaps. Well, if you’re struggling with a gritty buttercream, the good news is that you can fix it quickly.

Buttercream typically becomes grainy if too-cold butter or unsifted powdered sugar is used. The easiest fix is to let it rest, remix it, or add a pinch of liquid to the buttercream. Pinpointing what caused your grainy buttercream can help prevent future buttercream failures.

Hello! I’m Michelle, a self-taught baker with over ten years of experience. Buttercream is one of the first things I learned to create, and I’ve enjoyed playing with flavors from quirky and bold to succulent and sweet.

I’ve been met with plenty of grainy buttercreams in my day, and I’m here to share how to fix it quickly and easily.

Why Buttercream Gets Grainy (3 Reasons)

Before we can dive into how to fix grainy buttercream, we need to understand why it happened in the first place. After all, grainy buttercream isn’t just “going to happen.” Something certainly went wrong during curation.

Take a look at your buttercream recipe. Find the ingredients. Typically, the very first ingredient listed is butter. But it doesn’t stop there. The ingredient list will specifically state butter at room temperature. There’s a reason for this.

If you try to blend too-cold butter with your other buttercream ingredients, it will be a struggle – even for a competent, hardworking stand mixer. The end result? Clumpiness and a noticeable graininess in your buttercream frosting.

While your butter shouldn’t be melted, it shouldn’t come right out of the fridge, either. Cold blocks of butter will be impossible to blend.

So, leave it on the counter for about an hour before you intend to use it. You can also soften it in the microwave, but don’t overdo it. It should not become a liquid.

I know plenty of people are part of the margarine craze. In fact, my mom was a proud member of that club for quite some time! While there is nothing inherently “wrong” with margarine, it’s typically not the ideal choice for baking – and that includes buttercream.

It all comes down to the composition of margarine. Since there is more water and less fat, you won’t be able to get the creamy, desirable consistency of buttercream. Instead, you will be met with a grainy, too-soft mess.

While you can keep the margarine for toast and baked potatoes, I don’t recommend it for buttercream frosting.

Unsifted powdered sugar will likely have some clumping, big and small. It’s imperative to sift it before making buttercream. After all, clumps won’t disappear on their own. They will simply become a part of your buttercream, leaving it grainy and gross. Yuck!

How to Fix Grainy Buttercream (4 Tips)

If you find yourself with a batch of grainy buttercream, don’t panic. There are several ways you can fix it.

Sometimes, your buttercream is grainy because you just haven’t mixed it enough! The solution? Keep mixing until it’s 100% smooth.

To mix your buttercream, I highly recommend using a stand mixer. Stand mixers will create the smoothest buttercream possible without the hard work on your behalf. Who wants to work harder than they absolutely have to?

When using a stand mixer, you should only need to mix your buttercream for another few minutes. If it’s still grainy, try one of the other remedies.

Your buttercream may simply need a pinch more liquid, such as milk. Begin by adding a tablespoon of liquid to your buttercream, then mix. This should fix the problem, although you may need to add a few more tablespoons of liquid before you’re satisfied with the result.

Some people have also tried adding melted chocolate to their mixture. I haven’t personally done it, but it makes sense considering chocolate is an emulsifier. Simply melt down chocolate and add it, one tablespoon at a time, until the buttercream is no longer grainy.

Maybe your buttercream just needs a vacation! Okay, not really. But letting your buttercream frosting sit for a few hours in the fridge can sometimes help the grainy problem. During this “resting period,” the powdered sugar crystals can melt, resulting in a smoother buttercream.

4. Use the Paddle Attachment

If you’re using a stand mixer to create your buttercream, it is critical that you use the proper attachment. Always use the paddle attachment, even if you use the whisk to mix other ingredients like the eggs. The paddle will create the silkiest buttercream possible!

How to Avoid Grainy Buttercream in the Future (4 Tips)

Making buttercream and then trying to fix it can be pretty time-consuming. The better option is to avoid this mishap in the first place! Here are a few tips to ensure you don’t end up with a gritty nightmare in the future.

Always use butter at room temperature. It should not be melted. In fact, it shouldn’t be soft, either. Room temperature butter will be around 70F and still feel somewhat cold to the touch. When you press the butter, your finger should leave an indent.

Don’t try to swap margarine for butter in a buttercream recipe. It won’t turn out the same, especially when it comes to texture and flavor.

4. Use a Stand Mixer with a Paddle Attachment

The last tip is to use a stand mixer with a paddle attachment to create your buttercream. Use the lowest setting. The “low and slow” method will ensure that there isn’t excess air being whipped into the buttercream, ensuring it’s perfectly creamy.

Now you can finally kick grainy buttercream to the curb! Want to learn more? Here are some interesting, frequently asked questions you might want to know the answer to.

Can you overbeat buttercream?

Yes, you can overbeat buttercream. Overbeating will allow too many air bubbles into the buttercream, ruining the creamy consistency. Only beat your buttercream for a few minutes. When it’s done, it will have a somewhat stiff peak.

How do you rescue split buttercream?

The easiest way to fix split buttercream is to heat it ever so slightly before mixing. It’s best to hold it over the stove until it begins to melt, then whip it using your stand mixer for a few minutes.

There can be two issues causing your buttercream to taste like powdered sugar. For one, you may have used clumpy powdered sugar, and you’re biting into the clumps. Secondly, you may not have used enough flavoring. Make sure you’re following your recipe to a tee!

Why did my frosting curdle?

Curdled buttercream is often the result of using too-cold ingredients. Always make sure that the ingredients you’re using are at room temperature for the best results.

Buttercream is a tasty topping for all kinds of goodies, but it’s not so great if it ends up grainy. To fix gritty buttercream, try mixing it for a few more minutes using the paddle attachment. Add some liquid if necessary. Or, let it rest and see if the buttercream works it out on its own.

How do you fix your grainy buttercream? Share your tips and tricks with us!