So your brownies came out undercooked. Well, don’t get all defensive now! We know it wasn’t you. It was the recipe, the oven, the timer. Anything but YOU. But whatever the case, you’re the one who has to fix them.

Don’t worry. These delicious fudgy treats are easily fixed. You can put them back in their tray and in the oven, or simply put them in a microwave-safe container and nuke them a few rounds.

I’m Angie. I’m a self-taught baker who’s been baking for over 10 years. I love brownies and I love baking them. In this article, I’m going to teach you how to rescue your undercooked brownies. It’s really easy, so no need to panic.

How to Tell If Brownies are Done?

You can tell if brownies are done by looking at them. The top of your brownie should be matte and cracked. You can time your brownies according to the recipe.

You can also perform the toothpick test by sticking a toothpick into the center of your brownies and look for a smear of chocolate goo when it comes out. Alternatively, you can just check the internal temperature of your brownies. When it reads between 165 and 210°F, it’s cooked.

I’ve written more about this in another article, check it out for more detail.

There are two simple ways you can fix undercooked brownies – in the oven or in the microwave.

To fix undercooked brownies in the oven, simply resume baking your brownies in the same tray it was baked in. If you discover that it’s too gooey after having removed it from the tray, you can still place it on a regular baking tray and heat it some more in the oven preheated to 350°F.

For the microwave method, you’ll need a microwave-safe dish. Whereas oven heat travels through the pan from outside in, microwaves travel inside out, making this a perfect way to save your undercooked brownies without overcooking the sides.

Place your brownies in a microwave-safe dish or container, set your microwave to medium and heat the brownies at 30 seconds intervals. Check after each time and be careful not to burn your brownies.

Still wondering why your brownies are undercooked and how to fix them? Find your answers below.

Why are my brownies raw in the middle?

Heat usually reaches the side of the pan much sooner than it does the center. That is why your brownies might be cooked on the sides but undercooked in the middle.

If you’ve followed the recipe exactly but your brownies are still completely raw in the middle, it could be that you’ve used a pan that is too small causing an increase in thickness of the brownie. The thicker the brownie is, the longer it’ll take to cook.

Remember however, it is okay for your brownies to still be slightly gooey in the center once they’re done.

Should brownies gooey in the middle?

This is really your personal preference. Generally speaking, to make brownies chewy and fudgy, your brownies should be a little undercooked and gooey in the middle. Cakey brownies on the other hand should no longer be gooey.

How do you make brownies less gooey?

To make your brownies less gooey, you can cook them for a little longer as instructed above. Or if your brownies are already cooked but still too gooey for your taste, simply put it in the fridge and chill them. The low temperature will help the chocolate and butter solidify and make it less gooey.

Do brownies harden as they cool?

Brownies do harden as they cool. This is because fat and chocolate used in brownies have a liquid consistency when heated but solidify once cooled.

How long should I let brownies cool?

Typically speaking, you should cool your brownies for at least half an hour before cutting them or digging in. Keep in mind the time varies depending on the size of your tray and the thickness of your brownies. For a larger tray, it can take up to two hours to cool. Rule of thumb, just touch it with clean fingers and make sure they’ve completely cooled down before cutting them.

You see, brownies aren’t difficult to make, nor are they difficult to fix. If you find that your brownies are undercooked, simply pop them in the oven or the microwave briefly, and you’ll have perfect brownies waiting to enter your tummy.

How do you fix undercooked brownies? Have you had any brownie disasters? Share them with us in the comments below! 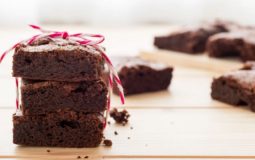 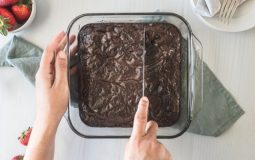 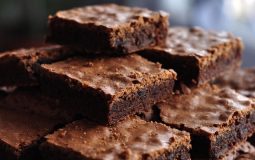