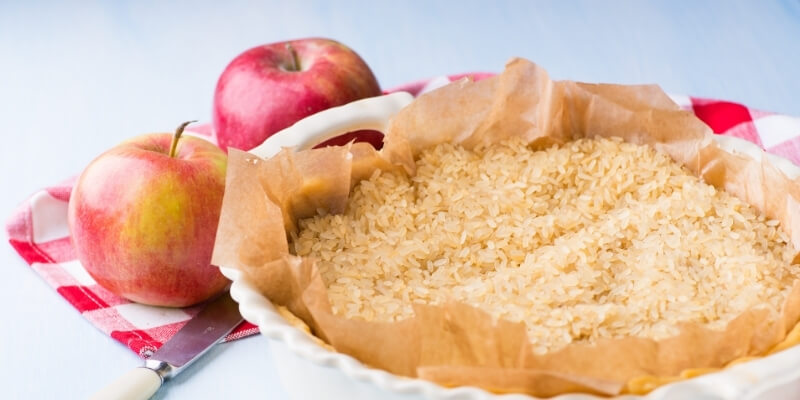 Good news first! You don’t need to be blind to bake blind. Duh.

You’d think knowing this would make blind baking less intimidating, but nope. I know too many people who’d given up on certain pie recipes as soon as they see that they need to blind bake. I was one of those people.

It’s only a matter of time before you start to realize it’s a fear to be conquered because blind baking is a crucial step in pie and tart baking. The word most likely comes from the French word Cuire à blanc, meaning to bake a pie crust or pastry on its own, without any filling.

The first time I had to blind bake was around eight years ago. It was when I made a quiche. Since then I’ve blind-baked many more times and by now it’s become pretty effortless.

In this article, I will explain a few theories behind the word blind bake and why the term came to be, briefly explain why and how to blind bake in an effort to make blind baking a little easier to swallow for you.

To be fair, there isn’t a real answer to this question, only plausible theories. Some say that it is a figurative use of the word blind because when you are just baking the pie crust on its own, you are “blind” to what kind of pie it will turn out to be.

Another interesting theory I came across was that – because the word eye is a way to describe the center of something (as used in the phrase the eye of a hurricane for example), a blind-baked pie crust is without its center filling, making it blind.

Perhaps the most plausible theory of all, is that the word came from French.

In French, the word for blind baking is Cuire à blanc, which literally translates to “bake white”. The word “blanc” in French sounds similar to the word “blind” in English, and the misinterpretation/mistranslation is often regarded as the reason why the term blind baking came to be.

Why Do We Blind Bake?

Blind bake is also called pre-bake or par-bake. As I explained, we do this by baking a crust on its own before adding filling into it. It is an essential step when you’re baking a pie with a wet, unbaked filling such as a pumpkin pie, a custard pie, or a quiche.

There are two main reasons why we blind bake.

One, so that the pie crust can harden before a wet filling is added to it, which can lead to a soggy pie bottom.

Two, the pie filling may take less time to finish baking compared to the pie crust, so partially baking the crust before adding in its filling can ensure that the whole pie is evenly cooked throughout.

How to Blind Bake?

To blind bake, you will need to get yourself some pie weights. You don’t need specific pie weights per se but you do need some sort of weight that can hold your pie crust down. Some people choose to use beans or rice which are cheaper, more accessible options.

Pie weights are to be placed on a piece of parchment laid in the center of your pie and covering the whole surface. As your pie crust is heated, the butter in your crust is going to melt and this creates steam.

The steam will cause your dough to puff up which is something we have to avoid because a risen crust will take away space in your pie that is reserved for your filling.

Once you’ve put in your pie weights, just put your pie in your preheated oven and bake at 425°F for 15-20 minutes. Temperature and the amount of baking time can vary slightly, but what you are looking for is a slightly browned crust.

For a more detailed guide on how to blind bake, check out this guide right here.

The following are two commonly asked questions related to blind baking that you might find helpful.

Blind baking is absolutely necessary when you’re making a pie or a tart with wet or uncooked filling.

What can I use to bake blind?

You can bake blind with storebought pie weights, beans, rice, or clean coins.

See, blind baking isn’t that intimidating after all is it? Now that you’ve learned why blind baking is called what it is, theories of how the name came to be, and how to blind bake, I hope you’ve gathered enough confidence to try making pies and tarts again.

What are your thoughts on why it is called blind baking? I’m genuinely curious. Share them with me in the comments below!