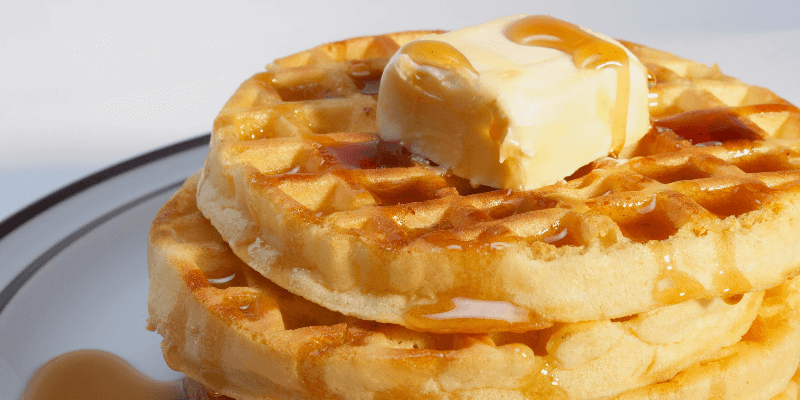 My kids and I love waffles. We make them at least once a week. It’s the perfect (and surprisingly quick) breakfast option. However, I don’t commonly use vegetable oil like “requested.” I prefer to use mashed fruit like bananas, butter, or yogurt. There are lots of other substitutes, too!

Hey, there! My name is Michelle, and I have been baking for the past ten years. One thing I’ve learned throughout my baking adventures is that you don’t always have to follow recipes perfectly. Using substitutes can be convenient and may make your treat taste better.

If you’re planning to make waffles in the morning but don’t have vegetable oil in your kitchen cabinet, don’t worry. There are countless numbers of substitutes you can use. Which, in my opinion, tastes better than oil.

Let’s check out my top six substitutes for vegetable oil in waffles.

Most people have vegetable oil in their kitchen because it is so versatile. It can be used to bake cookies, stir fry some vegetables, and anything else your baker’s heart desires. But just because it’s convenient doesn’t mean you always have it on hand.

Some people simply don’t like vegetable oil whatsoever and prefer to cook and bake with a different ingredient entirely.

Either way, you can get by with making sensational waffles using one of these great swaps.

Ok, I will be honest – I am slightly obsessed with butter. I’m that person that likes to see the butter dripping off of my toast. I just can’t help but love that rich and indulgent flavor!

That said, it’s no wonder why butter is my top pick for swapping vegetable oil in waffles.

You can use melted butter in a 1:1 swap for vegetable oil. Personally, I use salted butter because I don’t mind a bit of extra saltiness (but I’m not salty, I promise *wink*). If you want to limit salt intake, use unsalted butter or reduce the amount called for in your recipe.

If you’re ditching vegetable oil to be healthier, you might consider using mashed fruit. There are many great choices, but the top three are mashed bananas, applesauce, and pureed pumpkin.

Obviously, the flavor may be slightly altered depending on which fruit you choose. That isn’t necessarily a bad thing, though. The taste should be relatively subtle and indistinguishable, especially when making flavored waffles.

The fruit can also be used as a flavor enhancer. For example, I love to make blueberry waffles. If I use mashed bananas instead of oil, the waffles get an extra dose of fruity flavor that is nothing short of delicious.

When using mashed or pureed fruit, you can swap 1:1.

3. Coconut Oil (For a Crispier Texture)

To be fair, any kind of oil can act as a substitute for vegetable oil in waffles, and you should render similar results.

However, I chose coconut oil to be a standout swap because I love it. Coconut oil is nutritionally-dense compared to most other oils. It also has a coconut-y flavor that pairs well with any waffle recipe, whether you make the classic buttermilk or pina colada waffles.

One thing to note is that coconut oil will make your waffles crispier on the outside. Personally, I’m a big fan of added crunchy notes. I think everything tastes better with some crunch. However, not everyone feels the same way.

Yogurt is great for breakfasts, snacks, whatever. But did you know it can also be used in place of vegetable oil when making waffles?

There are two things to consider: yogurt type and flavor.

Regular plain yogurt won’t cause a stir in the flavor department. On the other hand, Greek yogurt has a noticeable tanginess that will present itself in your waffles. It’s not bad, just not what you might be going for.

Flavored yogurt (regardless of the type) can alter the final flavor of your waffles – positively or negatively. For example, I wouldn’t use strawberry yogurt for apple cinnamon waffles, but I would 100% use it in chocolate waffles.

Use ¾ cup of yogurt for every cup of vegetable oil and enjoy amplified flavors and an undeniable fluffiness.

In this day and age, everyone is adding cauliflower to everything. That said, it’s no wonder why I had to add pureed cauliflower to the top six list. I know it’s a bit “off the wall,” but if you’re trying to get healthier, this may be the right way to go.

Pureed cauliflower is very subtle and won’t change the flavor or texture of your waffles. All you need to do is add ¾ cup pureed cauliflower for every cup of vegetable oil. And voila! You have tasty waffles that sneak some veggies into your day (maybe a great option for moms and dads!).

Adding mayonnaise to waffles does not sound appealing – I get it. But when you’re in a pinch. The good news is that mayo in waffles is unnoticeable yet provides plenty of added moistness. So, if you love a moist waffle, you shouldn’t think twice about adding mayo instead of veggie oil.

You can substitute melted mayonnaise in a 1:1 ratio.

Now you know the top six swaps for vegetable oil in waffles – some of which may have surprised you! Keep reading the commonly asked questions below if you want to keep learning about this fun topic.

Can waffles be made without vegetable oil?

You can make waffles without vegetable oil, but you will need to replace them with another similar ingredient (like the ones listed above). You cannot achieve the preferred waffle texture without some type of oil or replacement – yogurt, mayo, fruit, etc.

What is the best oil to use for waffles?

The best oil to use for waffles is unquestionably vegetable oil. It has a neutral flavor that won’t alter your waffles taste. It also has a high smoking point, which means it can handle the heat of your waffle iron without fail.

Can you use olive oil for the waffle mix?

Olive oil can be used in place of vegetable oil. I don’t like it too much because olive oil has a somewhat intense flavor that can overwhelm waffles. So, unless you’re using a waffle recipe with a strong flavor, I wouldn’t recommend using olive oil (unless you have to).

Can you use pancake mix for waffles?

You can successfully use pancake mix for waffles. Most mixes will actually have the recipe for making waffles on the back of the packaging. If not, you can likely get it by adding a tablespoon of oil (or another ingredient above) and a whole egg.

Most people love waffles – yes, even those who claim to be “pancake people.” Making them is a breeze, too, even if you don’t have vegetable oil. While butter, mashed/pureed fruit, and yogurt are my favorite swaps, you can also use coconut oil, cauliflower, or mayo.

Have you used any of these vegetable oil substitutes in waffles? Do you have a sub to recommend? Share below!