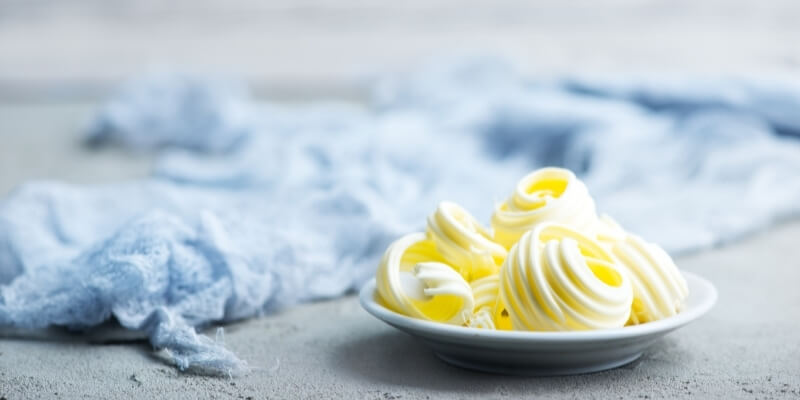 You may have come across the word Oleo in your grandma’s cookbook, or any older baking recipe really. I, for the longest time, thought that Oleo was Oreo misspelled. Let’s just say I’m happy I did my research otherwise the results could have been disastrous.

Oleo is short for oleomargarine, which is a butter substitute. As unusual as the name sounds, it’s actually a very common product you can find at the grocery store.

I’m Angie, I’ve been baking for over 10 years. In this article, I will share with you all about Oleo, what it is, how it differs from butter, some interesting history behind Oleo, and answer some commonly asked questions about the product.

Let’s get into it!

The word oleomargarine is a combination of the Latin word oleum for oil and the Greek word margarite, meaning pearl. In its early days, oleomargarine was commonly referred to as Oleo in the united states. Nowadays, it is known as margarine all over the world.

Oleo is made from vegetable oil and water, combined with other ingredients such as flavoring and coloring to imitate the taste and texture of butter.

Now let me tell you a little bit about how Oleo came to be.

The year was 1869. France was under the rule of Napoleon III and a war with German states led by Prussia was just around the corner.

In an effort to lower the price of butter so it can be more affordable to the public and easy to supply the military during war times, Emperor Napoleon III decided to hold a competition to find a cheaper, more accessible alternative to butter and offered a great prize for the winner.

The chemist Hippolyte Mège-Mouriès, having already been experimenting with food for years, had won the contest with the invention of oleomargarine using a chemical process known as hydrogenation.

During this process, hydrogen is introduced into heated oil, which solidifies liquid fat. Hippolyte gave oleomargarine its name, patented it, and went home with a hefty amount of money.

Oleomargarine caught on right away in France and the rest of Europe. Yet the effort was not well received when this new item and its production was brought over to the United States.

Part of the reason behind this is that America was in the process of shifting from an agricultural economy to an industrial one. Dairy farmers and butter manufacturers were particularly threatened by the arrival of Oleo and appealed to Congress to regulate the item with a prohibitive tax.

As a result, the Oleomargarine Act of 1886 was passed which allowed chemists to check samples of butter for adulteration with oleomargarine, imposing a tax of two cents per pound of Oleo used. It wasn’t until 1950 when this act was terminated.

The Oleomargarine Act was not the only action taken against Oleo in the US. Wisconsin in particular banned Oleo altogether but particularly yellow Oleo, because they believed that there should be no substitution for butter, and that “yellow belongs to butter”.

To get around this ban, which wasn’t lifted until the 1960s, people began to see pink oleo being offered in grocery stores.

As a millennial, I must say I am all for pink oleo making a comeback.

While the texture and taste of Oleo are designed to be very similar to that of butter, its composition is very different. Butter is naturally derived from dairy and while Oleo is mostly made of plant oils.

Oleo is lower in saturated fats and contains no cholesterol when it is completely plant-based. However, it does contain a lot of trans fat. Butter has a natural yellow tint while Oleo on its own is white. To make Oleo appear more butter-like, yellow food coloring is sometimes added.

According to Medical News Today, one tablespoon of unsalted butter weighing 14.2 g contains:

And one tablespoon of unsalted stick margarine weighing 14.2 g contains:

Why was Oleo banned?

Yellow oleomargarine was banned in Wisconsin and a few other states with strong dairy lobbies as dairy farmers’ livelihoods were threatened by this new cheaper product and were against butter being replaced or adulterated with any artificial alternatives.

Can you still buy Oleo?

You can buy Oleo. It’s just less likely it’s still called Oleo. These days people refer to Oleo as margarine and you can find it at any grocery store right next to where you’ll find regular butter.

What is the best substitute for oleo?

Butter! Oleo was made to replace butter, some people call it fake butter, what better way to replace the fake stuff than with the REAL thing?

I hope that you’re now a little less confused about Oleo. Oleo is exactly the same as modern-day margarine. Thank goodness we live in a world where using it is no longer taxed or offending anybody.

Have you ever found Oleo in an old recipe? What was it used for? I would love to see what the recipe says about it. Please share your Oleo recipes with us in the comments below!