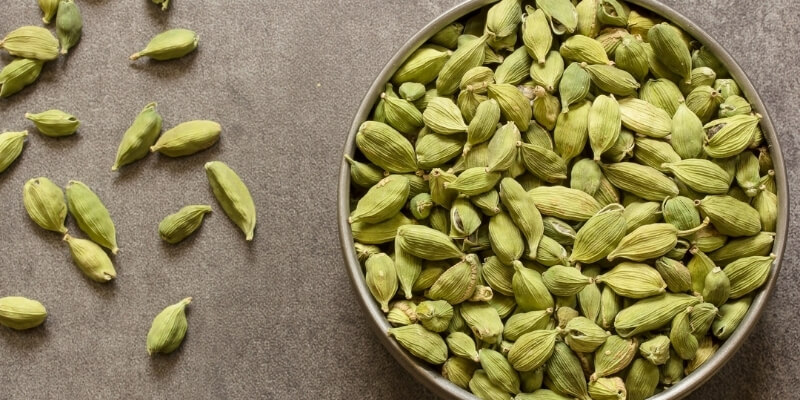 Cardamom has a strong yet sweet flavor with hints of mint and smokiness, which is why you will find it in various recipes, from curries to desserts. If you’re out of cardamom or don’t wish to buy it, you can also use a combination of spices, the most common being cinnamon and cloves.

My name is Michelle, and I am a huge fan of the intricate and delectable spice cardamom. But I don’t always have it on hand. Through my years of cooking and baking, I have discovered some amazing substitutes for cardamom that yield delicious results.

This article is going to teach you all about must-try substitutes. So, if you ever find yourself in a pinch without this mystical ingredient, you can still enjoy your treats.

Look below to discover the top cardamom substitutes for baking!

The best way to recreate the flavor of cardamom is to combine two flavors. Why? Because cardamom has an intense, complex flavor profile. It’s nearly impossible to replicate with a single ingredient.

The number one combination for baking desserts is cinnamon and nutmeg. Both are bold spices with sweet undertones that will work best for various baked goods.

When using a cinnamon combination (with nutmeg or another spice), it is important to use ½ the amount. So, if the recipe calls for one teaspoon of cardamom, you will use ½ teaspoon of cinnamon and ½ teaspoon of the other ingredient.

From there, perform a taste test to decide whether the baked good needs more fake cardamom.

If you’re baking up a treat with a bit of a kick to it, you might want to use cinnamon and cloves instead. Since both of these spices have an intense flavor, together, they become a powerhouse of flavors that closely match the real deal.

However, keep in mind that cinnamon can stand alone in baking recipes if you only have cinnamon in your pantry. The flavor profile might not be exact, but it will come close.

If you taste and smell cardamom and turn around and taste and smell allspice, you won’t find too many differences. That’s because allspice is similar to cardamom in aroma and sharp flavors.

A major reason why allspice is a great standalone substitute solution for cardamom is that it has undertones of clove, nutmeg, and cinnamon. That said, you get the best of all worlds when dealing with allspice: sweet, savory, and with a bit of a bite. Perfect for baking!

If you’re anything like me, you enjoy the intricate flavor profile of ginger, especially in baked goods. That’s why a cinnamon and ginger combination works well for baking. It tastes closely related to cardamom but with a bit more of an emphasis on ginger.

Are you looking to go in the opposite direction flavor-wise? Cumin and coriander can work well together to replicate the taste of cardamom. But be careful – this mix is especially pungent and tends to work better with rice, meat, and curry dishes.

That doesn’t mean it can’t be used for baking, though. When using cumin and coriander in baking, try to use half the amount called for. For example, a teaspoon of cardamom would be replicated with ¼ teaspoon cumin and ¼ teaspoon of coriander. Add more if needed.

Do you want to learn more about cardamom substitutes in baking? Check out these frequently asked questions!

What flavor is similar to cardamom?

Since cardamom has such a complex flavor with tons of sweet and savory undertones, it can be hard to pick a taste with a similar flavor profile. However, cinnamon and allspice tend to be the closest match. These spices should pair with other spices, though, for a closer resemblance.

Is Cardamom similar to allspice?

Yes, cardamom is pretty similar to allspice. This is because allspice has some of the same undertones, like clove and cinnamon. However, cardamom still has far more complexity than allspice.

Is coriander the same as cardamom?

No, coriander is not the same as cardamom. Although they may look similar and have certain matching flavors, coriander tends to have a citrus note, while cardamom has a mintier taste.

What is cardamom used for in baking?

Cardamom is used in many baking recipes, including cakes, cookies, and puddings. It provides an intricate taste that kicks the flavor profile up a notch. With cardamom, you can produce a sharp and exciting flavor in baked goods.

Cardamom is an incredible spice with many undertones ranging from sweet to savory. It is used in cooking and baking alike. When you’re out of cardamom, the best replacement for baked goods is a combination of cinnamon and nutmeg, although allspice is a good pick, too.

Do you bake with cardamom? What is your favorite cardamom recipe?